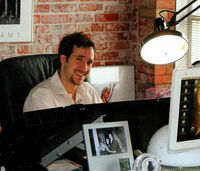 Michael Turner had worked with various publishers, most notably Image Comics' Top Cow Productions. After the success of Witchblade and Fathom, he founded Aspen MLT, as named after both himself and one of his most popular characters, Aspen Matthews. After founding Aspen, he began publishing Fathom through Aspen, and to this day, it is still published through the company. He also played a huge part in many of the series which have been published through the company.

Retrieved from "https://aspen-mlt.fandom.com/wiki/Michael_Turner?oldid=2218"
Community content is available under CC-BY-SA unless otherwise noted.